Well, it's official: I registered for Ironman Florida today.

I'm ready to take the plunge for a variety of reasons, the biggest of which is the fact that I'll actually have the time and energy to train (like a pro) for an Ironman. In addition, I'm just ready for a new challenge. I love the 70.3 distance, but I'm itching to go longer and try my hand at the IM game.

So why Florida??? Well, despite the fact that it's supposedly a Clearwater-esque draft fest of a race (not that that matters once feet hit the pavement), my past 2 Novembers down in the sunshine state have been pretty successful to say the least, so why not?

In the mean time, gotta put the finishing touches on my RI 70.3 prep and bring my fitness back up to par. It was a long school year and my lack of distance training sessions has left me a bit under powered. Just as well I suppose... lots of distance coming my way over the course of the next 4 months :)
Posted by JRM at 3:57 PM 2 comments:

Finally... the school year, and along with it, my teaching career, have come to an end.

It was a bitter sweet moment this past Friday as I said good-bye to my co-workers. I had been waiting all year for this day to come, but when it finally did, I was very saddened by the fact that I was leaving such a great school district, and so many outstanding educators behind.

It's not easy to walk away from such a great job, but as I watched Evans, Zyemtsev and Lavato run down the finish line today at IMCDA, I was reminded of the fact that there's no way I'll ever end up on top of an Ironman podium while trying to juggle 2 jobs and part time training.

At this point in time, I'm still way off top form, as far as long course fitness is concerned at least, and the leisurely 21 mile run that I laid down today (the longest run I've done in a couple of years, I think) made this fact indisputably clear. Let's just say that I have seen better days.

Anyway, enough complaining. I'll have the time and energy to log the big miles now, so it's time to get to it. A little extra pool time won't hurt either :)
Posted by JRM at 10:11 PM 3 comments: 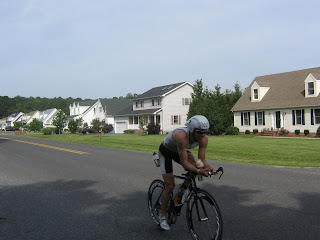 This stuff never gets any easier, but then again, despite the stacked international field I'll be facing and the weather forecast that's calling for 95 degree temps and humidity, the challenge that I'm about to face pales in comparison to what thousands faced 64 years ago

I still don't understand why June 6th isn't designated as a national day of remembrance here in this country. I checked CNN.com today and there wasn't even a blurb about the D-Day invasion. It breaks my heart to think that our country's greatest generation, a group of people who sacrificed and endured so much, is slowly being forgotten and taken for granted.

I'll be thinking a lot about June 6th, 1944 when the going gets really tough out there on Sunday (and it will).