Let’s get right down to it: For the competitive endurance athlete, the number one objective of any training program is to maximize your degree of event specific fitness. This being said, effective training requires both coach and athlete to first and foremost understand the unique physiological and psychological stressors that the athlete will be subjected to during competition. Simply put, if you expect your body, and mind, to be able to perform at a specific effort, for a specific period of time on a specific course while dealing with specific environmental conditions, your training program must fully prepare you to be able tolerate this very specific set of stressors come race day! As any good coach or athlete understands, event specific, or “specialized” training, is an integral part of the annual training progression; without it, peak athletic performance will not be realized. This being said, we can count on the fact that there is one, and only one approach that every athlete must take when preparing for a given competitive event or distance, right?

specialized training is in fact a key ingredient in any successful annual training progression, we must dive deeper in order to gain a complete understanding of each athlete’s unique physiology before undertaking the exact training practices that will yield the peak performance that both coach and athlete are striving so hard for. One of the “laws” of training is that in order for training to be effective, it must be individualized. In order to completely individualize an athlete’s training, we must first understand what kind of aerobic “engine” the athlete possesses, just how strong that engine is, and what kind of fuel economy it’s capable of!

Metabolic testing is a term that is often mentioned yet quite often misunderstood. When most people hear the term “metabolic” they immediately think of calories, or basal metabolic rate (the amount of calories your body burns daily, at rest); while metabolic testing can in fact measure an athlete’s BMR, this is just the tip of the iceberg as far as its application is concerned.

I’ve been fortunate enough to team up with Seaside Cycle in Manchester, MA to work on this project. Seaside Cycle recently invested in a New Leaf metabolic testing system, and along with JRM Training, is now offering a wide array of testing services for the cyclist or triathlete looking to maximize their performance potential. This state-of-the-art apparatus, when utilized in conjunction with power (bike) and/or velocity (run) based testing is a surefire way to pinpoint your body’s unique needs as you gear up to approach your event specific training program.

Stay tuned for our next series of vlog posts which will dive deeper into the use of metabolic testing & analysis and how you can best utilize it to maximize your athletic potential in 2010 and beyond.

Looks like wunderkind Steve Wright capped off what has proven to be a break through tri season by placing 3rd in the M18 – 19 division down in Tuscaloosa, AL at the 2010 USA Triathlon Age Group National Championship today.

This was Steve’s final race for the 2010 season and as a Jr. competitor. As long as the fire continues to burn brightly, I expect that 2010 will prove to be the tip of the iceberg of what should be a great career for Steve. Keep an eye out for him in 2011
Posted by JRM at 2:45 PM No comments: 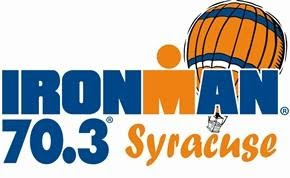 In my book, it is the performance that matters most, not the placing. As any good athlete knows, you cannot control what the competition does on race day; you can only control your own actions which in turn dictate your performance. This being said, although I love when my athletes land on the podium (which one of them did today as a matter of fact) I love it even more when they NAIL the breakthrough performance we've trained for (which they both did!)

For John Babcock and Keri Boyle, today's Syracuse 70.3 was yet another huge step forward performance wise.

John has already proven himself as one of the most dominant, up and coming triathletes in the NE region this year, having won a slew of events between the sprint and Olympic distance and knocking off some great athletes along the way. Today was a great means of evaluating how much progress he had made since last year on the long course front, and he hit this one out of the park: 4:16, which was good enough for 17th overall, 4th overall age grouper and a HUGE performance PR. To see him run under 1:20 OTB after a strong swim and bike is a great sign indeed, especially since he was running in the 5:4x range through about mile 10 before the wheels started coming off. At just 23, John's best years as a long course athlete are still well in front of him (thankfully, I will no longer be competing by that point!!!) so I'm thrilled with his progress today along with his season in general. If he can keep the fire burning brightly, there is no doubt in my mind that he will blossom into one of the best pro triathletes in the US within the next few years.

I consider this to be Keri's first real year of training so I'm already well aware of the fact that although she is blowing her old 70.3 PRs out of the water by nearly an hour and a half (yes, you heard me right - 90 minutes), she still has A LOT of room for improvement. We typically see the BIG jumps occur after 1 year of solid training (such has been the case with John), so as exciting as this year has been for Keri, she's just getting warmed up for what's in store for next year. Although Keri's AG was SUPER stacked and she fell a bit short of the podium, her performance was good enough for 28th overall and 16th overall amateur. I couldn't be happier :) 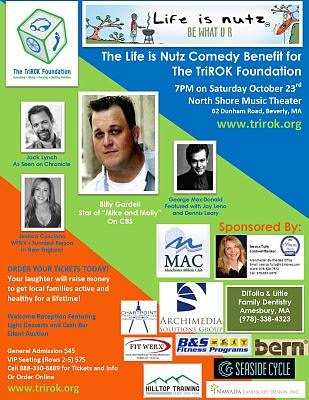 This past weekend was my last trip out into "the field" for a while. Due to the fact that I decided to sit this season out, Michelle and I have been touring all around New England (and Europe!) supporting my athletes whenever possible. Although sitting on the sidelines can be trying at times (I envy the fact that they get to brawl while I feel like a slug sitting on the curb!) it's been a great thrill to watch my crew in action this year, and this past weekend was no exception.

Ironman triathlete/RD Kat Donatello has proven that you don't have to have the numbers "70.3" attached to your venue in order to make it a smashing success. Let's be honest: Triathlon is very much an industry these days; the fact that I am a full time coach is a testament to that fact. Races are a huge part of the triathlon industry, and the WTC (Ironman) is fast becoming a monopoly of sorts. As both coach and athlete, I don't think that's necessarily a good thing, so I'm very happy to support homegrown, down to Earth events such as Pumpkinman. 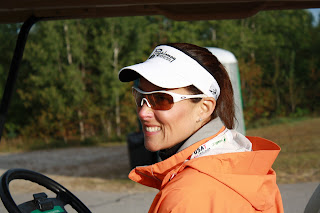 At the end of the day, a race should be much more than a race - it should be an experience, and if you're anything like me, I don't find stressful experiences to be all that much fun. Pumpkinman is about as stress-less as it gets: An easy drive to and from the venue, a smaller/more manageable field (400+/- athletes on race day), a quiet course, great volunteer and spectator support and arguably THE BEST post race meal (full Thanksgiving dinner!) and awards (cash and great prizes) in the entire NE region.

We owe it all to Kat's vision and her year round dedication to producing one of the best events in the country. Although it's a shame that more people don't know about this race, maybe that's a good thing! :)

Onto the action: I had athletes competing in the sprint (Saturday) and Half Iron (Sunday). For people like Keri Boyle (pictured below, gearing up for her first race as an elite!) a former mid packer turned elite level age group athlete, and John Babcock (another elite) the sprint race served as a tune up for Syracuse 70.3 1 week later. Both Keri and John went on to have great days; Keri took 3rd place in the elite race and John placed 4th in one of the most hotly contested sprint races in NE this year (I will note that all 3 guys that beat John were/are licensed pros!). Donna Furse, on the comeback from a foot injury, managed to win her AG while former body builder turned triathlete Kelli McDonough capped what's been an OUTSTANDING first season of triathlon by turning in yet another solid performance. 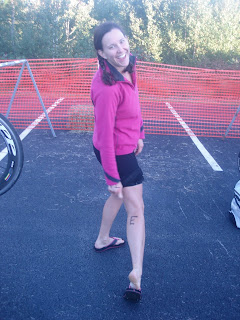 Although I was unable to make the race on Saturday, I couldn't be happier with the crew! The bar had been set for Sunday.

Michelle and I made the early morning hike up to S. Berwick, Maine and arrived just in time to watch the elite wave leave shore. Leading the way for team JRM was none-other than the up and coming Nate "Dawg" Buttrick - fresh off a 4:17/AG win at Timberman 3 weeks prior. I knew this day would be a good one for Nate Dawg. In only his 2nd year of triathlon (and what I consider to be his first real year of training!) he's emerged as one of the best long course triathletes in the region. The scary thing is that the kid isn't even close to his potential yet. Along with John Babcock and a couple of other young bucks I coach, Nate is one of those guys that I'll have to watch out for when I return to racing next year! I still have a few tricks up my sleeves though, so I'm confident I'll be able to keep these guys in line.

Nate (pictured below/on his way towards the finish), was joined by Craig Lewin, Greg Guarriello, Melissa Moeckel and Dr. Margot Robinson (aqua bike). All 5 athletes were capable of laying it down yesterday and all 5 athletes did just that. Melissa set a HUGE PR for the distance (2+ hours?!), Greg (seen running behind Nate in the pic below) overcame his work induced lack of training to chalk up a great result and Nate, Craig and Margot all landed on the podium.

For Nate, yesterday's race proved that Timberman was no fluke; his 4:10/2nd place overall finish clearly solidifies his standing as one of the best long course athletes in New England. 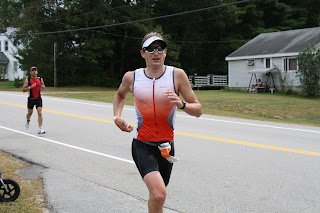 Margot powered her way to 2nd place overall in the aqua bike division and showed that she's in good form and ready for her final 2 Ironman length AB races this Fall. 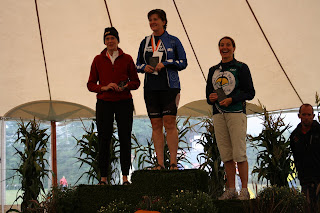 As for Craig, despite being on the comeback trail after 2 years of no racing thanks to a broken knee (hit by a car), yesterday's race was another big step in the right direction. He managed to pick up the M25 - 29 AG win in the process. Craig is still a ways off of top form, but it's coming back and we're getting close to being back to where we left off pre-accident. 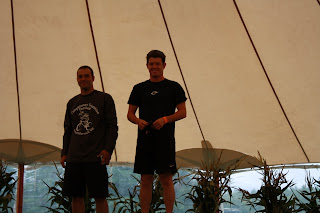 I'm still awaiting word from Danielle and Maris out at IMWI but I watched the 2 best friends cross the finish line together last night on Ironman Live. Pretty cool! I'm anxious to hear what they have to say about their respective races.

That's it for now. Next race: Syracuse 70.3! I'll be tracking the action from afar this time around though.
Posted by JRM at 1:55 PM No comments: