I'm feeling too lazy to post anything about Cohasset, so you can check out Michelle's blog if you're so inclined :)

Legs weren't as tired as I expected them to be after this initial block of IM training. It was a solid day, but nothing to write home about. A win is a win though, and I was happy to support race director Bill Burnett and stop # 1 on the Commonwealth Tri Race Series.

Best part of the day was seeing so many of the athletes I work with in action and catching up with them pre and post event.

Well, it's raining, excuse me, POURING again today. We've had about 3 or 4 sunny days this month. Not fun.

Back at it tomorrow with the next big round of IM training: 3 weeks of big volume. It's looking like I'm going to skip RI 70.3 in order to concentrate on my IMWI prep - I need the training time.

In the mean time... off to another Gloucester Tri related meeting this afternoon and swim practice tonight.
Posted by JRM at 10:20 AM No comments:

I can't believe the momentum that the Gloucester Tri is building. The event is already close to sold out (St. Peter's Square is going to be bursting at the seams with athletes!) and it seems like everywhere I turn, someone is talking about it. Dawn Guarriello happened to be walking through the Burlington Mall the other day and came across this: 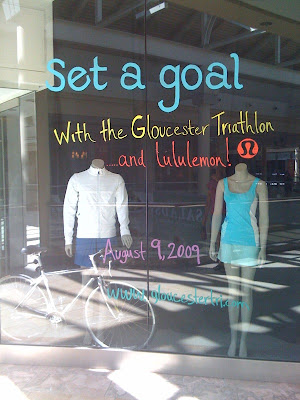 Even the Mayor of Gloucester is gearing up for the inaugural event. She's clearly fired up and ready to roll, as evidenced by her most recent column in the Gloucester Daily Times.

Speaking of races, it's time to roll again. I kick my season off with the Cohasset triathlon tomorrow. I have zero expectations as far as racing is concerned right now. My only objective for this year will be to punch my ticket to Hawaii '10, so anything leading up to IMWI is going to be nothing more than a training session. I backed off my IM prep yesterday and today, so I'm hoping that the legs have a little life in them tomorrow as I would prefer to NOT get beaten by the entire elite Jr. field that will be in attendance. I'm sure that the race will seem like an all out anaerobic sufferfest, but it's all good; at least it'll be over quickly :)
Posted by JRM at 10:31 AM 1 comment:

It Won't Be Easy

This past weekend featured my first round of IM specific intro sessions and served as a nice wake up call to the reality of what prepping for this distance will entail. In a nutshell... being "70.3 fit" doesn't mean a thing when you're prepping for a 9 hour race and I am NOT (currently) in shape to successfully pull off the Ironman finish I'm hoping to on 9/13! That's okay, still plenty of time until race day, but there is work to be done.

I spent Saturday out on the open roads chalking up nearly 3 hours of IM pace work in the midst of a 4 hour ride. I wasn't feeling so hot towards the end of the session and can't say that I enjoyed my short "T" run post ride either! Lessons learned: I need to be dilligent with my asthma medication during the summer months, especially when it's humid and air quality is poor. Wheezing on the bike and struggling through T runs isn't my idea of fun. Other lessons learned: There's a big difference between simply riding your bike for hours on end, which I have no problem doing, and pinning your watts up around 260+ for 5 hours. I'll be emphasizing the later with my training.

Sunday was a much better day. The rain and cooler temps left me feeling nice and relaxed while out on the bike. I spent a little over 2 hours spinning out @ 230+ watts (nice and easy), practiced the art of "peeing" while in the saddle (hey, why the hell not? I was already soaked anyway. And... if the goal of this training is to emulate the stress/realities I'm facing on race day, I've got to accept the fact that pissing while on the bike is going to be something I have to learn how to do because there's no way in hell I'm giving up 2+ min. to pull over to the side of the road during the race) got off, consumed 1 pria bar, took a couple of puffs off the inhaler and was on my way around the cape. I was surprised how easy a hilly 17.1 mile run felt after riding, but was especially surprised by how good I felt after Saturday's session. I think that my inhaler made a big difference though as I could barely breath towards the end of Saturday's ride.

Anyway... good sign that I could ride for over 2 hours and then run for nearly another 2 on nothing more than 100 calories and 1 bottle of water (a stupid move on my part to go without adequate liquid, but given the rain and cooler temps I was able to get away with it this weekend).

Well, I get to enjoy a well deserved active recovery day today (swim only) but it's back to the grindstone tomorrow: Heavy dose of FT work on the bike and run fronts. I hope the rain will end. It's been raining here for nearly 2 weeks now.
Posted by JRM at 10:18 AM 1 comment:

I do not think that I could do that and I'm 20 years younger than Mike.

Well, at least I can say that I helped him with his training!
Posted by JRM at 11:09 PM 1 comment:

In the mean time, congratulations to all who competed this weekend.
Posted by JRM at 8:36 PM No comments: