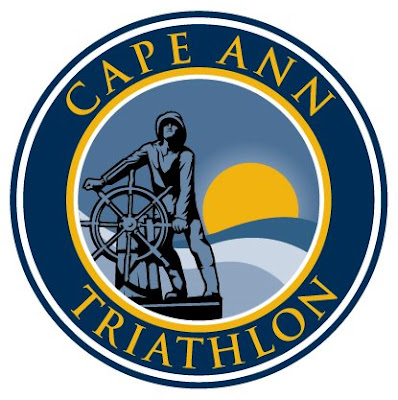 Where: Gloucester, MA
When: August, 2009
What: Sprint distance triathlon
Why: Fundraiser for the Gloucester Fishermen Athletic Association.
More to come...
Posted by JRM at 10:03 AM 2 comments:

But I got it done. 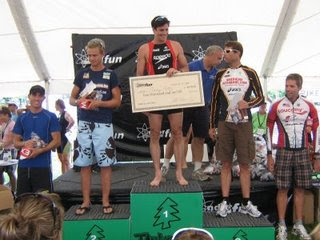 The short of it: I knew that I was in trouble before the day even began. Legs were dead during my pre-race warm up and things never improved once the gun sounded.

As my power file will attest, I was underpowered and completely drained on the bike yesterday. I kept hoping that the engine would warm up, but it never happened. It was 56 miles of pure misery and frustration. I felt so awful that I entertained the idea of pulling the pin once I hit T2, but upon arrival, there was no way that I could quit in front of my friends and family, so I pressed on. The fact that Chrissie Wellington was hot on my heels provided enough motivation to keep me pressing right up to the finish line and onto the podium (thank you Chrissie).

In retrospect, it was a good performance. I went 2 minutes faster than last year and held my own in a competitive field despite tired legs and low energy levels. The culprit: The big block of Ironman prep that I just laid down. I've been so tired from the extra volume that my speed and aerobic power have all but disappeared. Not the feeling I was hoping for on race day, that's for sure.

This bodes well for my next 70.3 race (Muskoka). I'm going to resume standard 70.3 prep between now and then, and the higher quality/lower volume approach should leave me sharp as a razor and ready to roll. Although forgoing a block of IM training might come back to haunt me on Nov. 1st, the Muskoka prize purse is a nice one, so there's plenty of incentive to sharpen the legs back up as I look forward to Sept. 14th. I can't wait to race in Canada by the way! We're going to stay up in Muskoka the night after the race and then drive down to Niagara Falls the next morning before we fly home from Buffalo. I'm hoping that the weather is nice because it should make for a beautiful late summer trip!

But I digress... back to Timberman: The weekend was a big success for a bunch of my athletes. I now have 10 people qualified for Clearwater, so looks like I'll be staying down in Florida an extra week after I knock off IMFL on 11/01.

That's it for now. I'm feeling too lazy to write a full recap. Michelle posted one on her blog with pics. if you'd like to check it out:

Time for some R&R. Gotta rest the legs up before I start hitting the track and TT course again next week!
Posted by JRM at 4:49 PM 1 comment: